Chickadees, sparrows, and most other birds go through life with just feathers on the top of their head. Some, like cardinals, have gaudy crests. Chickens are different. They have fleshy combs on their heads with wattles dangling below.

What good are combs? No one is completely sure, but they are impressive. Combs may play a reproductive role.  A rooster might prefer cozying up with a hen sporting a tall single comb. Or he might prefer one with a more subtle pea comb.

Combs help chickens regulate their body temperature.  Warm blood circulating in a comb releases body heat into the air. Breeds originating in hot climates, like Leghorns and Minorcas, usually sport the biggest combs. That helps them keep their bodies cool during an Alabama summer but likely makes them uncomfortable during a frigid Maine night.  In contrast, the tiny combs of Brahmas and Wyandottes hardly ever suffer winter frostbite. 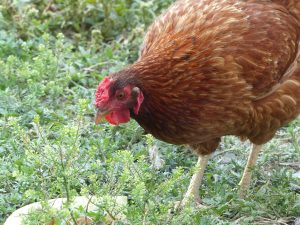 There are at least nine types of chicken combs based on their size and shape.
They are:

Genetics determines the type of comb a chicken has. Consider how varied people are.  They may have blond or black hair, see through blue or brown eyes, and show dozens of other traits caused by their genetic makeup. People have but 23 pairs of chromosomes, while chickens sport a whopping 39 pairs.  It’s no wonder chickens vary so much in appearance, personality, and productivity. 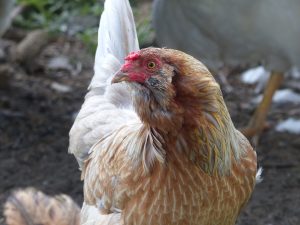 Over hundreds of years chicken breeders used the bird’s vast genetic diversity to create breeds to look a certain way, lay lots of eggs, or gain weight quickly.  A tiny Serama bantam rooster weighs only 12 ounces, while a Jersey Giant can tip the scales at 13 pounds, yet they are the same species!

It’s ironic that the single comb is most common but is a recessive trait. Mate a single comb chicken with a pea or rose comb bird, for example, and none of the resulting chicks will have single combs. If all chickens freely mated it is likely single combs would be rare or even extinct.

Chickens are amazingly tolerant of different climates, but comb type is important when choosing which chicks to buy.  A Leghorn rooster’s huge single comb might freeze on subzero nights, while a Brahma’s tiny pea comb hardly ever suffers frostbite. Free ranging chickens with pea combs might be best suited to northern Minnesota, while big combed Leghorns easily handle Florida’s heat. 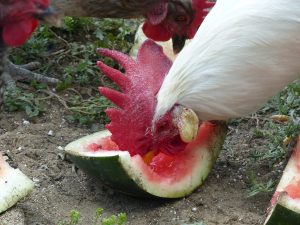 A fun part of keeping chickens is the great diversity different breeds show in size, color, personality, and type of comb.  When placing a chick order it’s easy to choose birds that have different types of combs.