Skip to content
How to Identify Chicken Preadators: Birds of Prey

It may seem silly to think that a hawk could attack a chicken and fly away with it, but it happens all of the time. Red-tailed hawks, red-shouldered hawks, eagles and owls will all attack chickens if given the chance. This is the third of our 4-part installment of our how to identify chicken predators: Birds of Prey.
Identifying Attacks from Birds of Prey
One of the first signs of an attack from a bird of prey is a scouting bird. Hawks, eagles and owls will scout their prey out well before attacking it. You may notice a hawk circling the area above your chickens, screeching as it does. More than likely, the bird is checking out your chickens for potential prey. They may not attack your chickens right away, or even the next day. They will often wait and return when the coast is clear to make a grab at a bird. Birds of prey are very bold and will often try to take a bird from your yard right in front of you. You may notice that a chicken or two is missing. There usually aren’t feather left behind, but occasionally, a full grown chicken will be dropped by a bird. Chickens that have been attacked by birds of prey may have puncture wounds from the bird’s talons. They may also have missing feathers. Some birds of prey will consume the chickens where they took it. A chicken that has been eaten by a hawk, eagle or owl will have feathers that are cleanly plucked from the neck and breast area. 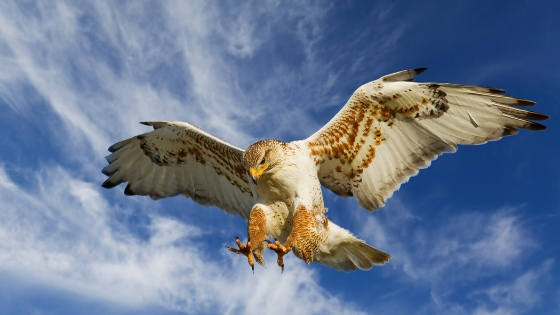 See more posts on how to identify chicken predators:
How to Identify Chicken Predators: Raccoons
How to Identify Chicken Predators: Foxes
How to Identify Chicken Predators: Weasels
Preventing Attacks from Birds of Prey
If you have birds of prey that are attacking your chickens, don’t attempt to catch them or kill them. It is illegal to harm birds of prey. If you have serious problems, you can contact local wildlife officials to figure out how to handle the problem. A rooster or two in the flock will help deter attacks from birds of prey. Roosters keep an eye out for predators and will often try to fight off predators, fighting to the death if necessary. They can also help alert your hens (and you) of possible attacks. Free ranged chickens are the most at risk for attacks. Chickens that are kept in a secure coop with a roof are generally safe from attacks from birds of prey.