Skip to content
How to Identify Chicken Preadators: Weasels

This less common chicken predator is one that shouldn’t be written off just because it’s not as common as the fox, raccoon or birds of prey. Chicken keepers that have weasels should always be prepared to deal with this vicious predator. This is the fourth installment of our 4-part series in how to identify chicken predators: weasels.
Identifying Weasel Attacks
Weasels, although small, are notorious for being both ruthless and hard to deal with. Weasels will leave chickens in a bloody mess. There will be feathers, blood and chicken carcasses left behind. Weasels will often kill for fun and attack in large family groups. A classic sign of a weasel attack is chicken carcasses with ripped off heads that are neatly piled up. They will also pull the intestines out of chickens and may or may not eat part of them. Another tell-tale sign of a weasel attack is an acrid odor that lingers in the air. When you’re trying to identify a predator that attacked your chickens, check out your coop. If it seems really secure and you can’t figure out how the predator got into the coop, it could be that the predator was a weasel. They can fit through tiny spaces and will to get to your chickens. 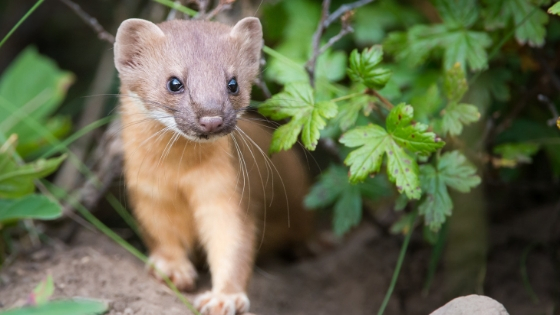 Preventing Weasel Attacks
Weasels can get into coops that are secure by most standards. They will dig under the coop walls. Prevent them from digging under the walls of the coop by burying the walls of the coop or burying metal wire around the walls of the coop. Weasels can easily fit through holes that are as small as an inch in diameter. If you live in an area where ferrets, fishers, mink, or martens live, use a sturdy wire fence with small holes to make your coop. Normal chicken wire might not hold up to a weasel attack. Repair any holes in the coop wire as soon as possible with hardware cloth. You can trap weasels using a live trap and cat food, tuna or a can of sardines. However, weasels are territorial and will almost always return to their home territory after being relocated.