If you have recently visited your local feed store and seen baby chicks and baby ducklings available, the impulse to get a few of these and a few of those is irresistible!

Before you bring home your fluffy babies, here are some important differences to know about raising ducklings vs raising chicks!

Generally, ducklings and chicks will need a separate brooder. Sometimes, they can all get along, but sometimes unfortunately they can fight. Ducklings grow much faster than chicks, and have been known to pick on baby chicks. Even if they do get along as babies, ducks will require different things than grown chickens.

Ducks will also need a large pool of water to swim and bathe in when mature. A pond or lake is best, but we don’t all have those. A kiddie pool is easy to clean and makes a great splash pad for backyard ducks. 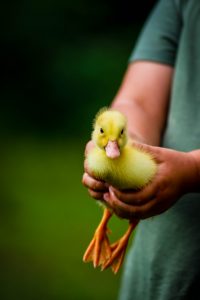 Ducks have ravenous appetites, and will scarf down their dry feed very quickly. After filling their mouth with feed, they will need immediate access to water; water deep enough to fit in their entire bill into. They then drink and mix the water and food together, allowing it to be swallowed. To avoid choking, ducklings and ducks must have constant access to water.

In addition to drinking water, they will of course try to swim in their water. Most likely, their water will need to be changed once or twice a day.

On average, a laying breed of chick can stay in the brooder for up to 2 months. They really should only be allowed outside when all their feathers have grown in.

Ducklings, on the other hand, can be let outside much sooner, permitting the weather is decent. Ducklings will grow so fast! You will notice a change daily! They will no longer need the lamp of the brooder during the day at around 3 -4 weeks old, and will be fine outdoors in the daytime. (You should still bring them in under their heat lamp at night if temperatures drop below 50° F. )At around 2 months of age, your ducklings will be mostly feathered and ready for a permanent residence outside. 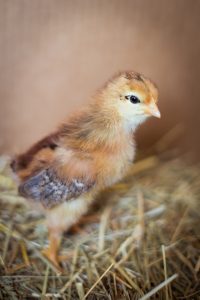 For the first few weeks, both ducklings and chicks should be fed chick starter (crumble type) with about a 21% protein content.

Change to a smaller protein content, 16%-18% starter crumble after a few weeks until they are about 6 months old, for both.

One MAJOR difference is that ducklings require niacin! Niacin is Vitamin B3. Chickens, humans, and ducks all require niacin in our diets, but waterfowl require double the amount than chickens do! A lack of niacin can lead to leg deformities. Some feeds already contain niacin, so be sure to read the label. If your feed doesn’t, you can easily buy some brewer’s yeast. Brewer’s yeast is basically leftover, non-active yeast, made from the process of beer making. Sprinkle about a tablespoon of this yeast into the ducklings feed. It is sometimes called “nutritive yeast.”

Ducklings are more likely to imprint.

Although both are extremely adorable, from my experience, ducklings are much more inquisitive than chicks. Baby chicks have a natural instinct to fear humans. Those big hands coming down to pick them up, will send them running! Ducklings can be afraid of us at first too, but will become tame much quicker. If you are able to get your ducklings right when they hatch, or a day or two after, they will likely imprint on you!-making adorable sidekicks.