Skip to content
Pheasants and Turkeys in the Backyard

Perhaps the most intriguing of all birds are ring neck pheasants and wild turkeys. Although mostly wild birds and popular quarries for hunters, many people raise their domesticated counterparts for beauty and delicious food.
RINGNECKED PHEASANT
Like chickens, pheasants trace their origin to wild birds in Asia and are sometimes called Chinese pheasants. These colorful long-tailed birds caught the eye of Judge Owen Denny, who was serving as a council in Shanghai. In 1881,1882 and 1884 he had wild birds captured and shipped to the Pacific Northwest. Some were released on his family farm in Oregon. They found living condition ideal and explosively multiplied. Just a decade later 50,000 were shot during Oregon’s first legal pheasant hunting season.
Wild pheasants soon spread throughout North America and today live in agricultural areas where there is a mixture of grassland, grain crops, and brushy fence lines. Pheasants are mostly a northern bird and don’t thrive in the deep south. Numbers likely peaked in the 1950’s when farms were smaller and had a diverse mix of crops, woodlands, and grasslands. In most places wild populations have declined as grass and brush were dozed to create more cropland.

Many people raise pheasants simply because they like the colorful birds, enjoy eating the tasty meat, or to replenish depleted birds by stocking. They are trickier to raise than chickens. Chickens are truly domestic with breeds that are efficient producers of eggs and meat. In contrast, strains of pheasants have been tamed but never really domesticated. They’re outstanding flyers and must be confined to a covered run.
Stocking pheasants won’t restore a self-sustaining population. If the habitat is suitable wild birds will already live there. Many research studies have shown that stocked pheasants quickly disappear and releasing them is a waste of effort.
That doesn’t mean that families should shun raising pheasants. They are beautiful and interesting, and the meat is delicious. Their needs are somewhat different from chickens. Before buying a batch of pheasant chicks research how to raise them and check state laws. In some places raising game birds requires a permit. 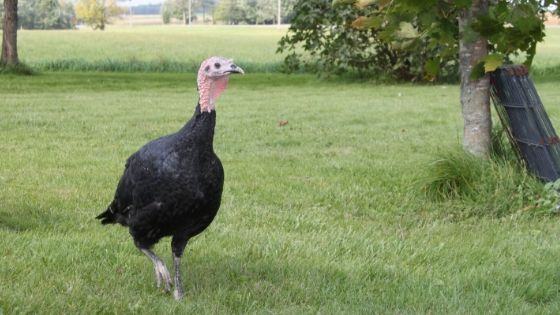 WILD TURKEYS
Although it seems a contradiction in terms many people raise hatchery bred “wild turkeys” in their backyards. Unlike pheasants, which were wild birds in Asia, turkeys are American natives. Millions of them swarmed in forests and clearings when Europeans arrived on our shores.
Turkeys were domesticated centuries ago by Native Americans. Soon after Columbus European explorers began bringing turkeys back to Europe where they eventually became a commonly raised meat bird.
The wild turkey is the ancestor to many breeds that have been developed for beautiful feathers, fast growth, or large size. Both the tamed strain and truly wild turkeys are delicious eating but to efficiently produce Thanksgiving dinner choose one of the domestic meat breeds. They grow faster and get bigger than their wild cousins.
Truly wild turkeys were nearly pushed to extinction over a century ago by massive habitat change and over shooting in the days before hunting regulations were established. Thousands of people tried restoring local populations by raising hatchery bred wild turkeys and releasing them. These introductions always failed, as the birds had little ability to find food and avoid predators.
Today wild turkeys seem to live nearly everywhere. Populations were restored by live trapping birds from natural areas and quickly transporting and releasing them in suitable habitat devoid of birds. These truly wild turkeys knew how to survive and reproduce quickly. Today they are common in most states, even in urban and suburban areas.
All turkey breeds are interesting and some efficiently convert feed into meat. They get truly huge and yield a delicious Thanksgiving dinner. Broad Breasted White and Broad Breasted Bronze are the best meat producers, but Bourbon Red and Narragansett breeds have more striking feather colors. They are smaller than the meat breeds but also make delicious eating.
Homeowners can raise pheasants and turkeys for both beauty and meat but raising them is more complex and slower than with broiler chickens. Pheasants grow slowly and are outstanding flyers that need enclosed runs. They are utterly gorgeous but if allowed to roam unconfined they’re likely to disappear forever.
Raising pheasants and turkeys in a backyard can be rewarding and fun but may take more knowledge and care than with chickens. Be sure to read up on them before placing an order.
Anyone wishing to easily and efficiently produce meat in in the back yard might be most satisfied sticking with Cornish Cross Broiler, Ruddd Ranger, Husky Red, or Red Broilers. These chickens have been bred to grow very quickly and efficiently convert feed into meat.