Tending chickens comes with plenty of rewards, but lugging heavy water and feed isn’t one of them. Lifting also risks a sore back and tired muscles.

Feed manufacturers know that many people aren’t able to lift a 50-pound bag, so they package the same product in smaller containers.  It’s easier to carry a ten-pound pouch than a 50-pound bag. But it comes at a cost. The smaller the bag the higher the per pound cost.

There’s an easy way to move a big bag out to the car in the store’s parking lot.  Ask a salesperson.  Almost all feed retailers will ask an employee to carry the feed out to a customer’s car and lift it into the trunk.

That eliminates one need to lift the big bag but it still must be moved from the driveway into the coop’s storage bins. That’s where an old boating trick comes in handy.  Bailing. All that’s needed is a scoop and two buckets. Simply open the bag in the trunk and scoop feed from it into the buckets like bailing water from a leaky boat. Carrying two buckets of feed, each weighing ten or 12 pounds, is easier on the back than lugging a 50-pound bag.  It will take a few trips to transfer all the feed, but there’s little risk of strained muscles. 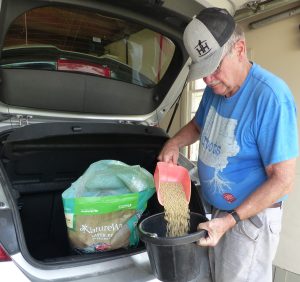 Chickens drink often and must always have plenty of clean fresh water in their coop. There’s a problem. Water weighs 8.3 pounds per gallon.  It’s easy for most people to lift small waterers from the tap to the coop, but often the hens quickly drain them, requiring frequent refilling.

A five-gallon waterer doesn’t need to be refilled nearly as often and reduces chore time. But carrying it from the tap to the coop means lifting 43 pounds of water plus a few pounds of the metal or plastic waterer. It’s a recipe for an aching back.

The solution?  Remember that old boating trick? Bailing. Clean the five-gallon waterer at the hose tap and put about a gallon of water in it.  Carry it into the coop.  Head back to the tap with a couple of buckets.   Most hold two gallons and weigh around 18 pounds when full.  Carry them to the coop and pour the water into the waterer. It’s now full.  All that’s left to do is place the cover over the waterer. It keeps water clean and  dribbles it into the pan as hens drink.

Few homes have a tap close to the backyard coop, so people must carry heavy water a tiresome distance.  A plumber can be hired to run a pipe to the coop, but that’s expensive.  There’s an easier way to have water next to the coop.

Rain barrels are an ancient technology that work perfectly today. They can be purchased online or at home and garden stores. They’re also easy to make from a barrel and valve. Add a gutter beneath a sloped coop roof and run the downspout into the top of the rain barrel. Even a light shower will quickly fill a 50-gallon rain barrel.  Fill buckets from the valve at the barrel’s bottom and it’s only a short walk to the waterer.   Rain barrel water is also handy for washing dirty hands and irrigating garden plants.

Caution: Some roofs can leach toxic materials into the water but most shingle and metal roofs yield clean, safe and refreshing drinks for the flock.  Make sure your roofing material doesn’t contain anything toxic before adding rain barrels.  Odds are it’s just fine. 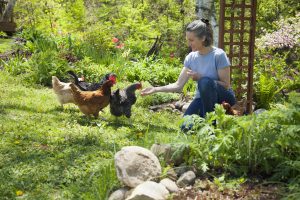 The right tools make chicken care easier. Need to dig soiled litter out of the coop so it can be replaced with fresh wood chips?  Many people use a snow shovel or grain scoop. They hold lots of litter and make for fast work, but these big shovelfuls are heavy. A small square point shovel, especially if it has a long comfortable handle, holds less litter but is light and makes the task easier. It will take longer to dig out the litter with the small shovel but back muscles appreciate the lighter load.

Another handy coop tool is a wheelbarrow. It’s easier and safer to roll heavy items than carry them. Sometimes a 50-pound feed bag can be easily slid from the trunk into the wheelbarrow, eliminating the need for “bailing” as mentioned above. The same goes for the big plastic enclosed bales of pine chips often purchased for litter. 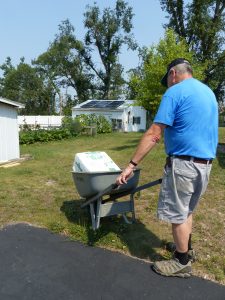 Electricity can be a huge labor saver. A chore on cold winter days in a non-wired coop is continually replacing buckets of ice with those filled with warm water. That can mean many trips to the coop. An electrically heated waterer keeps water liquid on even the coldest days and eliminates many trudges through the snow replacing ice with water.

Electric lights make checking on sleeping chickens easier than packing a flashlight and enables installing an automatic pop hole door that closes at sunset and opens when the sun rises the next day. Automatic doors also reduce the need to walk to the coop.  Electricity can power remote cameras and sensors so people can check their flock from a distance. Some operate on batteries.

Hiring an electrician to run power to the coop is an investment in convenience and safety.

Strong young adults may enjoy the lifting and walking that chicken care requires but as years roll by and hair whitens, water and feed seems to get ever heavier. Reducing strenuous chores helps children, older adults, folks with disabilities, and anyone short of time to care for their flock in ways that are safe and easy.