Homeowners with small backyard chicken flocks face a dilemma. As hens age they gradually lay fewer eggs. Eventually they decide it’s time to retire and totally stop.  If a family wants to continue enjoying fresh eggs, aging birds must be replaced with younger ones.  How do you know when to make the switch and just how do you do it?

Of the hundreds of chicken breeds and hybrids many are stellar egg layers, while some just don’t have the genetics to produce well. Towards the back of the Hoover’s Hatchery catalog is a chart listing the characteristics of nearly every breed they sell.  It includes the number of eggs a healthy hen of each breed is likely to produce in her first lay cycle. It varies from the torrid laying rate of about 300 for Leghorns and some hybrids to as low as 100 for fancy breeds better appreciated for beauty than production.

Given outstanding care and wholesome food and clean water, a pullet begins laying when she is between 16 and 24 weeks old. She’ll continue laying for around 14 months in her first lay cycle and then take a break. For six or eight weeks she’ll molt and grow a new set of feathers and restore her health. Then she’ll begin her second lay cycle and continue the lay/molt pattern as she ages.

No matter the breed’s productivity, a general rule applies. She’ll lay the most eggs during her first laying cycle. Then production declines by at least 10% in each subsequent lay cycle. By the time she’s five- or six-years old production drops to less than half of her first cycle until she approaches retirement. She may lay no eggs in her final years, and few hens live long enough to celebrate their tenth “hatchday.”

Most large commercial egg producers only keep hens for the first lay cycle before replacing them with younger pullets. Homeowners with small flocks often get attached to their hens and keep them longer, even though egg laying declines.  Eventually they will need to replace them. 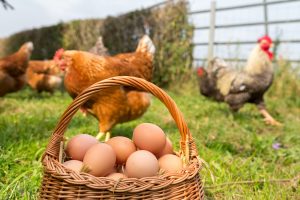 Replacing Older Hens with Younger Ones

There are several ways to replace aging hens with younger, more productive ones.

Starting Fresh: Some people prefer to completely change their flock every few years by disposing of old hens and replacing them with pullet chicks. It has the advantage of having productive young hens laying at their maximum. The disadvantage is enduring four or five months with no eggs after old birds are removed but before chicks mature and begin laying. An option is to purchase ready to lay pullets to move into the coop soon after the old ones depart.

Gradually Replacing Hens:   Another way to keep egg production high is to replace about half the hens with young pullets every second, third, or fourth year.   This requires having two separate coops – one for the older birds and the second to house chicks until they reach maturity and can be merged with the older birds.  It also works to buy ready to lay pullets and replace about half the old hens with them. These 16- to 20-week-old birds are expensive but help keep egg production high.

Flip flopping different breeds or feather colors helps an owner age hens.  For example, if old hens are Rhode Island Reds, replacing half of them with Barred Rocks makes it easier to distinguish between older and younger layers. It also gives an opportunity to try new breeds.

What to Do with Old Hens

Although many people don’t want to butcher chickens, butchered chickens are delicious. YouTube videos show how to process them. Don’t plan to cook them like grocery store bought chicken. Old hens have tasty tough flesh best stewed for several hours with potatoes, carrots and spices.

If butchering isn’t possible, giving old hens away or selling them for a nominal price is an option. Advertising on social media usually quickly brings people to take the old birds.  Often, they’ll butcher them as soon as they get home, but some people just like to have a few chickens around, even if they aren’t good layers.

Back in the days before incubators, broody hens hatched eggs and raised the chicks. They protected the babies from danger, showed them what’s good to eat, and even disciplined them. Broodies were moms and mentors. Modern chicks lack mothers, so keeping a few elderly hens in a flock allows the young birds to be mentored. Even retired hens have a role in life.