Back in 1983 swashbuckling and suave actor Sean Connery thrilled movie goers in the  James Bond spy movie, NEVER SAY NEVER AGAIN.   There might not seem to be a connection between the movie and chickens, but there is.

Chickens are individuals. No two are exactly alike.  Each has a distinct personality.

Sometimes they do downright goofy things that defy human logic. Chickens don’t read catalogs or books or watch YouTube videos about their supposed behavior but one thing is certain.  Rigid words don’t work to describe chicken traits.  Exceptions abound.    When preparing a chick order it’s important to remember that the chicken behaviors described in catalogs are just guidelines.

A few years ago, one of our California White hens decided she wanted to become a mother. Poultry books and catalogs say this common hybrid is a “nonsetter.”  Well, they usually are, but once in a while one successfully desires motherhood, hatches a clutch and faithfully raises her chicks. Ours proved to be a devoted mother.

In the back of the Hoover’s Hatchery catalog is a quick reference guide to traits of the various breeds they sell.  They use words correctly.  For example, in the column called mothering/broodiness they use these words:  often, occasionally, and rarely, rather than always or never.

California Whites, for example, do go broody, but rarely.  Most Buff Brahmas are great sitters and mothers but not always, so the Hoover’s word often accurately describes the likelihood, but not certainty, that a Brahma hen will set.  Sometimes a Brahma hen will decide she wants no part of parenting.

What do these words mean for someone trying to decide what breeds to order?

Well, lots.   A family wanting the maximum number of eggs and wishing to avoid dealing with non-laying broody hens would do well to order breeds labelled rarely broody.  A hen of this breed might go broody but most of her coop mates won’t. 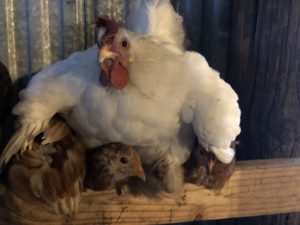 Watching a hen go broody and raise chicks is fascinating and a fun learning experience for children. Ordering chicks from breeds that often or occasionally go broody likely will yield a fun experience as long as she sits on fertile eggs.

The same goes for descriptions of chicken temperament.  Many breeds are listed as being docile or friendly, and they mostly are…….but every once in a while an individual of the breed will be  aggressive or flighty.

Although centuries of chicken breeding has generally standardized chicken body size, feather color and patterns, production ability, and even personality these amazing birds remain individuals that don’t always go by the book.  It makes keeping chickens a fascinating hobby.

James Bond had it right.  Never say never when applied to chickens.  Surprising exceptions are common.