Is your chicken losing feathers?  Any time that your chickens start to loose feathers, it can make you wonder what’s going on or worry you that you aren’t doing enough for your chickens.  Molting is a natural process that can look really bad, but in reality, it’s not.  So how do you know if your chicken is loosing feathers just because it’s molting or if there’s something else going on?

Signs Your Chickens Are Molting

Molting is a natural process that chickens go through every year. Just like sharks go through teeth frequently, chickens and other birds will go through feathers.  Feathers, like the hair on our heads, aren’t living and wear out over time.  When feathers get worn out, they fall out and are replaced with new feathers.  This process of losing and regrowing feathers is called molting. 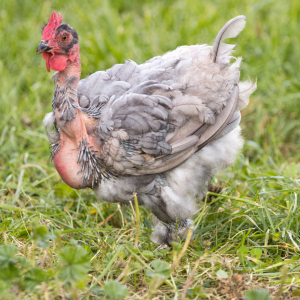 Birds will molt differently.  Some birds will gradually lose feathers and you might not even notice that they’re molting.  Others will lose a ton of feathers all at once, making them look pretty poor for a few weeks.

When chickens lose feathers due to molting, there isn’t any blood involved. The old feathers simply fall out and are replaced with new feathers.  The process can take several weeks to complete and it’s usually done in the fall, when the weather starts to change.

Signs Feather Loss is Something Else

There are a few other reasons why chickens will lose their feathers and they have some obvious signs that are associated with them.  Luckily, treating these issues is pretty simple.

A rooster is causing the issue.

Roosters can be aggressive when mating.  A rooster will use his beak to grab onto the feathers on the back of a hen, usually between her wings, as he mates with her.  Sometimes this can pull the feathers out.  There may be some bleeding when this happens.

If you notice a bald spot on your hens, you may not have enough hens.  You can add a few hens to your flock so that the rooster doesn’t mate with the same hens over and over again.  If adding more hens isn’t an option, you can buy hen saddles online.  A hen saddle is a protective piece of fabric that prevents roosters from damaging their back and pulling feathers out.

Chickens are generally healthy, but they can be affected by pests.  Mites are a common pest problem that can cause feather loss.  Some types of mites will attack the feather follicle, causing the feather to drop out.  Usually, the skin looks irritated.  Depending on the type of mite, you might notice red, swollen skin or small dots of blood covering the skin.  Chickens that have mites are itchy and will scratch at the area frequently.  Feather loss due to mites can happen all over the body, but it’s most common around the legs, head and cloaca.

If you suspect mites, treat the entire flock and coop thoroughly for mites.

Chickens have a strong need for an amino acid called methionine.  Methionine is found in animal and insect protein.  When chickens don’t get enough methionine in their feed, it can cause them to turn on one another.  If you notice behavior that looks like bullying, it’s more than likely a methionine deficiency.  This is commonly seen in chickens that are cooped up.  The bullying behavior can lead to cannibalism and even death.  In these cases, the feather loss quickly turns into larege wounds that then entire flock will peck at.

This sounds like a big problem, but there’s an easy fix.  Methionine is found in poultry feed, so you might need to change your feed.  A fresh bag or a higher quality feed should take care of the problem.