If you have chickens, unfortunately you will have mice!

Attracted to spilled feed, mice will find incredibly crafty ways to invade your coop. Removing feeders at night is a tremendous help. However, it isn’t always easy to remember to do that. If you’re like me, at the end of the day, the last thing you’re looking forward to is another farm chore. 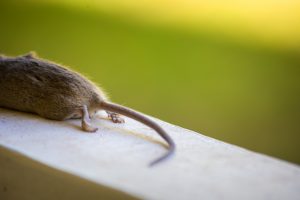 I’ll never forget the horror I witnessed one night in my coop. I had gone to lock the chickens up at bedtime, but was a little later than usual. The sun had already set and the sky was dark. I opened up the coop door and shined the flashlight at my roosting flock. As soon as the light hit them, they all opened their eyes and peered down at the coop floor. To my horror, there were probably 20 or so mice running for cover! They had been under the feeder, inside the feeder, and basically all over the place! It was the very next day I found a solution.

My husband and I scoured the internet in search of a DIY mouse trap that really works- and we found one!

Simply getting rid of mice in a chicken coop can be anything but simple. Snap traps could be stepped on by chicken toes, and only catch one mouse at a time. Poison isn’t a great option either. Your chickens could accidentally eat the poison, or even more strangely, eat the poisoned dead mice! Yes! I’ve seen it happen before!

So what do you do?

You need to catch LOTS of mice in one night!-without putting your chickens in danger.

Here’s what you need:

Drill a hole on either side of the top of the bucket. Pull your coat hanger wire through the empty bottle and through the bucket holes. You want the bottle to be in the middle of the bucket, and loose enough to spin.

The idea is the mouse will be attracted to the smell of the peanut butter. They climb up the ramp, and have to jump on the bottle. Once they do, the bottle spins, dropping them in the bucket below.

I really love this trap! It could take a couple of days for the mice to notice the peanut butter, but once they do, you’ll be in business. It helps to remove the feeder at night, so the mice will have nothing else to eat. They’ll just have to go for the peanut butter!

On my first successful night, I caught 9 mice!

Here’s the best part, you have the choice whether it is a “kill” or “no-kill” trap. If you wish to release the mice, you can! Just take the bucket VERY far away from the coop, and set them free.

If you wish to exterminate the mice, add about 6 inches of water inside the bucket. I know it sounds a bit gruesome, but if we do this, I actually give the dead mice to my dogs. We have farm dogs, who are trained to hunt vermin, so they appreciate the snacks.

Mice are cute. They are just trying to survive, and doing what mice do best. Despite this, mice and rats spread diseases to our livestock, eat up valuable feed, and make a nasty mess. Sometimes, we just need them gone. Chances are, you already have all the supplies to make this trap at home! Give it a try and protect your coop from becoming infested!