Skip to content
What Daylight Savings Time Does for Your Flock

In 1874, Benjamin Franklin wrote a letter as a joke to suggest that adjusting waking hours during the summer would conserve candles.  It wouldn’t actually become common practice until the mid-late 1900’s.  Although most countries in the world observe Daylight Savings Time, it’s often thought of as a nuisance to schedules and sleep patterns.  It takes us humans a couple of weeks to fully adjust to the new hours, which change twice a year.  What does Daylight Savings Time do for your flock? 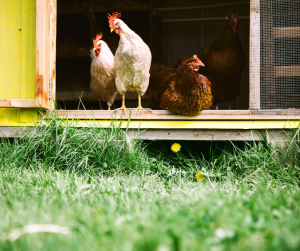 How it affects your chickens

Chickens are notorious for their ability to wake before dawn and willingness to get into the coop at dusk.  Since you won’t find alarm clocks in your chicken coop, their sleep schedule won’t be interrupted when you move your clocks back or forward.  Instead, plan on your chickens still rising with the sun and settling in at night with the sunset.

As the days start to get longer, your chickens will be exposed to more sunlight each day.  This is important because sunlight triggers the hormone system to start producing various hormones.  For example, as sunlight is absorbed through the chicken’s retina, it triggers the production of melatonin.  We often associate melatonin with sleep, but it has a different effect in chickens.  In chickens, melatonin is responsible for triggering the egg production cycle.  The more melatonin that is produced, the more eggs a chicken will lay.  This is why many hens lay less eggs in the fall and winter months.  There simply isn’t enough sunlight to produce enough melatonin to trigger frequent egg production.

You may also notice that your chickens become more broody during the Daylight Savings Time period.  This is again, due to a hormone.  As the days become longer, the chicken’s body starts to produce more of a hormone called prolactin.  In mammals, this is the hormone responsible for milk production.  However, in chickens, it causes them to become broody.  If you notice your hen is trying to sit on a clutch of eggs, it’s because her body is producing prolactin, thanks to the longer day length.

Will changing your clock affect your chickens?

You’re much more likely to be bothered by adjusting your clock than your chickens will be.  Remember, their bodies wake and sleep based on the daylight patterns, not an alarm clock.  You’ll notice that they will gradually wake earlier and roost later as the days get longer.

If you don’t want to adjust your schedule for your chickens, that’s ok too.  They will quickly adapt to the new schedule that you have.  It may take a few days or a week for them to adjust if you’re going to be feeding at a different time, but they will soon adjust.

Changing our clocks around may not be something you look forward to, but your chickens won’t likely notice that anything has changed.  The most important thing to remember is that keeping a schedule will keep them happy more than anything, even if that means changing the schedule slightly a couple of times each year.