If chickens sometimes act in quirky ways, it may be because of their vision.

It’s easy for people to assume that animals see things the way we do, but that’s not the case.  Animal vision varies greatly.  Like most birds, chickens see the world differently than their human caretakers.

Anyone who has filled an empty bird feeder is often surprised to see chickadees, nuthatches, and other wild birds almost immediately flap in for lunch. How do they know delicious seeds are in a feeder that has been empty for several days? Chickens do the same thing. Open the back door with a bucket of table scraps for the hens and they’ll immediately get excited and rush toward the person. How do chickadees and chickens know the banquet is ready? 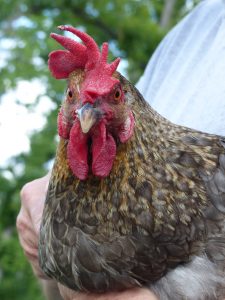 Well, there are a few reasons. Birds have an amazing ability to detect motion and respond to it faster than humans. They’re ultra-observant, so the second the back door opens, the motion catches a chicken’s attention. A hen or rooster Immediately lets the flock know a treat’s coming. There’s more.

Chicken eyes are truly amazing.  They comprise about 10% of its head compared to about 1% on humans. This helps them have exceptionally keen vision in many ways that people can barely imagine.  Here are a few amazing chicken vision traits: 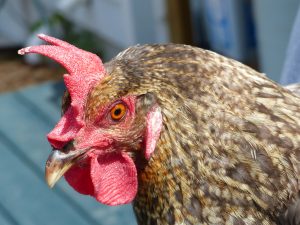 It would be fun to be able to spend an hour or two seeing the world as a chicken or chickadee does. That world would look different from what we see.