Skip to content
Rooster’s Serenade: What in the World Do You Do with A Rooster?

The day a box of peeping chicks from Hoover’s Hatchery® arrives is joyful.

Unfortunately, one or two of those delightful chicks may cause a dilemma. Most city ordinances welcome families to keep hens but their boyfriends are forbidden. Everyone “knows” that roosters are noisy, and the last thing the city council wants is complaints from neighbors awakened by gusty crowing.

To avoid roosters most people buy female, or pullet, chicks. It works, at least most of the time. Few people can distinguish between male and female baby chicks but   Hoover’s Hatchery sexors can. These highly trained workers separate the genders shortly after the chicks hatch. For some sex-linked hybrids that’s easy. Telling them apart is a cinch. Not so with standard breeds like Rhode Island Reds or Orpingtons.

Once in a while the sexors mislabel. Buy 25 pullet chicks and one or two will turn out to be roosters. What can be done with them?

Although baby male and female chicks look nearly identical, that changes as they age.  By six to ten weeks male chicks’ combs are usually bigger and redder than those of their sisters and their body may be slightly bigger. The older they get the easier it is to tell the boys from the girls, but one characteristic is a sure bet.  Adolescent roosters start crowing, often by the time they are ten weeks old. Their first crows are usually off key, rumbly grunts but soon it’s “cock a doodle do!” with gusto. 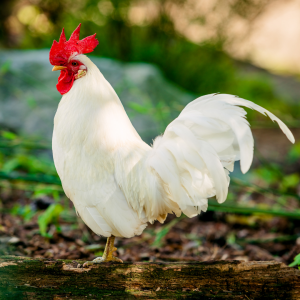 Why Keep a Rooster

Here are reasons for flock owners who can keep a rooster should consider keeping him:

Although keeping a rooster can be a delight, they have these downsides:

What To Do with Unwanted Roosters

In days gone by farm families usually bought “straight run” chicks of dual-purpose breeds. About half would be roosters, destined for chicken dinners, while hens were kept for egg production. Those days are mostly gone. What in the world can a suburban family do with a crowing and probably illegal rooster?  Here are some options:

Dinner:  Well, roosters are delicious. Dual purpose breed roosters, like Rhode Island Reds or Barred Rocks, reach eating size by about 12 weeks old and start to crow.   They’re not fully grown so their flesh will still be tender. How do you do it?   YouTube to the rescue!  Many videos show how to slaughter and process chickens at home.  There’s a problem.  Most cities ban slaughtering and many families simply don’t want to do it. The solution is to place an ad on social media. Often someone will pick up that rooster within hours. Most of the time he’ll end up as the new owner’s dinner but the slaughtering is his problem and, hopefully, he does it outside town.

Finding his new home: Some people want a rooster to add to their flock. Social media may help locate someone looking for a rooster who can legally keep him.

Roosters are beautiful and fascinating animals, but they just don’t work well in a typical small backyard flock. Anyone raising baby chicks should have a plan in place to deal with the occasional rooster mixed in with the females.