Skip to content
Raising Turkeys for Meat vs. Pets

We really enjoy raising turkeys on our little homestead. We’ve had our turkey, Tarzan, for six years now and he delights everyone who comes to see us with his strutting and gobbling! While we primarily raise turkeys for pets, we have accidentally raised turkeys for meat as well.

If you want to raise turkeys for pets, make sure you get a heritage breed turkey. Popular types of heritage turkeys include: Royal Palm, Bourbon Red, Spanish Black, Narragansett, Slate, and White Holland. Heritage turkeys can mate and breed in the wild. They grow slower and can live for a long time. Female turkeys also lay lovely speckled turkey eggs that are prized in the kitchen!

If you want to raise heritage breed turkeys for pets, you’ll want to take into consideration that they may roost in trees and be able to fly! Our turkey Tarzan got his name from roosting in trees. He’s so old, he can’t fly anymore, but he still climbs things to roost as high as he can. 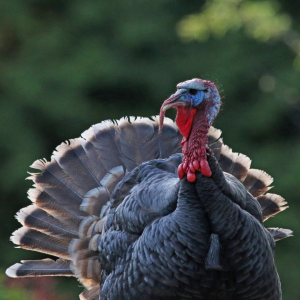 If you want to raise turkeys primarily for meat, you’ll most likely get one of the commercial breeds of turkeys. Like the Cornish Cross chicken, these turkeys have been bred to grow fast and have a large breast area. They can’t fly and most often, they cannot mate naturally.

To raise turkeys for meat, you’ll probably order new poults each spring, grow them out, and process them in fall. Common meat turkey types include Broad Breasted Bronze and Broad Breasted White.

Broad Breasted White turkeys are the most common commercial meat turkeys. Some raisers think they clean up a little bit nicer during processing, and they generally have a larger breast than the Broad Breasted Bronze. It takes about 16-20 weeks to fully grow commercial turkeys to slaughter weight.

Do you have turkeys on your homestead? What’s your preference – meat or pets?