Most families tend a small backyard flock for the precious eggs hens generously give each day.  Few human foods are as delicious or nutrient packed.  Add the pride of caring for productive chickens as a benefit beyond food.

Sometimes problems arise.  Once in a while a hen becomes a thief. She’ll eat eggs in the nest, making a mess in the process.  It usually starts when a hen spots a cracked or broken egg in the nest, pecks the nutritious contents, and decides it’s a delicious addition to her diet. An egg eater is a parasite that can’t be tolerated.

Prevention always beats a cure.  Fortunately, there are many ways to discourage or eliminate egg eating:

Anyone keeping a few hens in a backyard coop should realize that, sooner or later, a hen may become an egg eater.  Here are some ways to reduce the chances that an egg will get cracked or broken in the nest and tempt a hen to begin a bad habit: 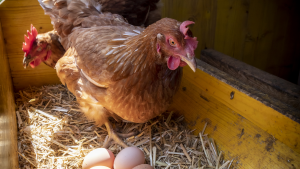 A certain way to foil an egg eating hen, while making collection easy is to use roll out nests. These have a sloped bottom.  As soon as a hen lays an egg it rolls out of the nest and is caught and held in an exterior tray or basket, making eggs inaccessible to chickens but easy to collect.  Some of these roll the eggs backwards outside the coop wall. Others roll eggs forward toward the interior of the coop. Usually the ones that roll outside are most convenient but installation may require cutting a hole in the coop wall. Quality interior rollers have a flap that protects the eggs from pecking hens.

Roll out nests can be purchased from many companies or homemade.  Sources and plans can be found on an Internet search.

Egg eating is contagious. One hen may begin snacking on a cracked egg and soon her coop mates will also give it a try.  Egg eating should be dealt with as soon as it’s detected.  Assuming that tips mentioned above aren’t working, there is a direct way to solve the problem-catch her in the act.

It’s not always easy figuring out which hen is the egg eater. That may take hours observing them directly or on a lucky encounter when collecting eggs.  When the culprit has been found one way to immediately solve the problem is to declare her a meat chicken. When mingled in with carrots, potatoes and spices in a stew pot she won’t be in the coop breaking and eating eggs.  It works, but most families don’t want to take such a drastic step. An alternative is to isolate her. Having a small extra coop available is handy for many flock situations. Isolating the egg eater for a week or two may discourage the habit.  Return her to the flock but keep an eye out for further signs of egg eating.

Some experts suggest sprinkling hot pepper powder on a broken egg to discourage eating  It might work but a chicken’s sense of smell and taste isn’t well developed so she may not even be aware of the hot spice.  Maybe she’ll even like it! It is worth a try, but also beef up calcium, pad the nest bottom, and collect eggs often in an attempt to solve the problem.

Occasionally a hen decides that she wants to eat eggs, rather than letting her human caretaker bring them into the kitchen.  It’s a bad habit that should be prevented, if possible, or cured if necessary.