Skip to content
How to Reduce Stress in the Flock

Chickens don’t do well when they’re stressed, just like humans.  Stress in chickens can lead to a myriad of conditions ranging from reduced egg production and increased illness.  Chickens are generally healthy, but they’re much more likely to get sick when they’re stressed.  Stress can also cause poor growth in developing chicks and meat birds.  Of course, stress is detrimental to your flock’s health.  So, what are the ways that you can manage your flock’s stress and keep it to a minimum?

It’s important to keep in mind that chickens are prey animals.  In nature, they’re on a constant lookout for danger.  Chickens have developed this constant awareness to keep themselves safe from predatores.  However, this constant awareness also makes them susceptible to developing stress. Be mindful of this when you’re caring for your chickens.

There are a few things that you can do to lower the stress levels for your flock.  Chickens will stress easily, even if there isn’t a predator or imminent danger in their environment. Sometimes, small changes can stress your chickens.  Let’s look at the most common reasons your chickens may get stressed and how you can tackle them.

Poor Quality or No Food and Water

Chickens think about food almost all day long.  In the wild, chickens would spend the majority of their day walking around in search of food and water.  IF you have chickens that are raised on pasture, you’ll notice that your flock does this.  They’re used to eating small bits throughout the day.  Chickens that are raised in a coop don’t have to work very hard to find their food.

However, if your chickens run out of suitable food and water, they’ll stress very quickly.  Chickens typically eat and drink throughout the day, so even a couple of hours without food can cause them to become stressed.

Try to keep a steady supply of fresh, clean water and suitable food available for your flock.  Make sure the water is clean and cool, especially during the hot summer months.  The feed you provide them should be suitable for their growth and/or age.  For example, feed hens a feed developed for laying hens and feed chicks a grower feed. 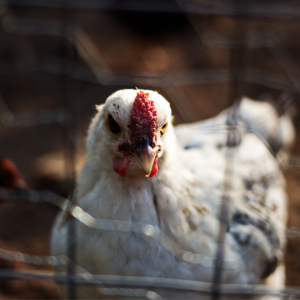 Rough or Scary Interactions with People

Each time that you interact with your chickens, try to make it positive.  In nature, humans have all of the signs of being a predator, which automatically makes chickens scared of you.  It’s your job to help them understand that you’re not scary, but instead they should expect good things when they see you.

An easy way to do this is to offer treats.  Chickens love mealworms.  Giving your chickens mealworms when you come to the coop is a great way for them to associate you with something positive.

When you’re in the coop, speak softly to your chickens and make slow movements.  Quick movements and loud voices are threatening to them and will create a negative experience and stress for your chickens.  A good thing to do is to simply sit in the chicken coop with your flock.  Take a five gallon bucket into the coop and flip it upside down.  Have a seat on the bucket and just spend time in the coop.  Not only will your chickens learn you aren’t a threat, but you’ll get to see some of their personalities also.

Chickens need smple space.  Remember, in nature, chickens would spend their days roaming freely.  If they’re cooped up, you’ll want to make sure that they have plenty of room.  As a general rule, each chicken should have a minimum of ten square feet in the coop run.  So, if your coop is 40 square feet, you will want to have no more than four chickens in that space.

Many chicken coops are made smaller than that, so you can compensate by allowing your chickens to get out of the coop.  Letting your chickens out for even an hour or two will make a big difference.

A big reason for stress in chickens is predator attacks, including dogs.  Even if a predator doesn’t get into your coop, just being on the perimeter of your coop will cause stress.  If you have dogs that taunt or chase your chickens, put them up.  You can also use a perimeter fence to keep predators or dogs even further from your coop and run.

This is one of the most common causes of stress in chickens.  You can do everything right and still get stressed chickens if they have issues with disease or parasites.  When you introduce new chickens to the flock, they can be carriers of disease or illnesses, even something simple like a cold.  They can make your chickens sick, which causes stress.  The same thing goes for parasites.  When chickens are uncomfortable or their immune systems are busy fighting off internal parasites, they can become stressed.

Keeping the stress levels low in your chickens is as simple as keeping them healthy.  Make sure they are getting plenty of fresh food and water, have ample space and that you, predators or disease and parasties aren’t causing undue stress.