Skip to content
Early Differences in Roosters and Hens

Have you ever been into a farm store that just got a new batch of chicks?

If you are like me, you have squinted and stared at the chicks until your eyes crossed, trying to pick out the males from females.

Unsexed chicks are labeled as “straight run.” This pretty much means the chicks were hatched and all put up for sale. Whatever mix of girls and boys is unknown and totally dependent of the luck of the draw. Chick gender is not determined by overall temperature of the clutch, as in reptiles. If it was, hatcheries would have capitalized on that long ago!

Luckily, there are a few ways to differentiate male from female chicks.

Roosters will often stand tall, and flap their wings against their chest. They do this to display to other males in the area and to show their presence. Young, baby cockerels can also be seen doing this at a very early age. Both males and females sometimes stretch in this way, but if it happens a lot, you may have a rooster! 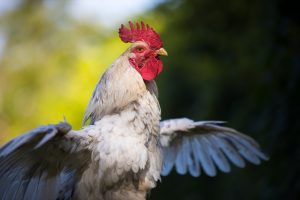 To the trained eye, a chick with stocky, large feet is almost always a rooster. The leg bones will seem thicker than the females, whose legs are often very thin. Think masculine and feminine. If a chick has massive tree trunks for legs, it is most likely a boy!

This one may seem silly, but a cockerel will often have a different look to its face. They often have slightly shorter beaks and redder coloration around the fleshy parts of the face. Young cockerels also have what I call a “mean” eye. Their eyes are slightly squinted all the time, giving them an angry appearance. Of course, this is not indicative of their actual personality! Look for the “angry” looking ones, and those are most likely males.

A few days after hatching, some of the first feathers to grow in are the flight feathers on the wings. It has been well documented, that you can successfully sex a chick by closely looking at these feathers. If the flight feathers are on one row and line up in a straight line, most likely you have a cockerel. For pullets, there are two rows of flight feathers, both a different lengths. If you are out shopping, try picking up a few chicks to see if this tactic really does work! 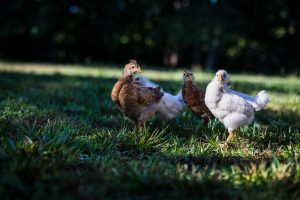 Some features that do NOT differentiate males from females include:

Pullets are just as likely as cockerels to be bullies as chicks. Aggression at such an early age is not an indicator of sex, it just tells you who the dominant player is.

The most reliable way to find out the gender of your chicks is through vent-sexing. Vent sexing takes a very trained eye and is often only done at the hatchery. Even with years of experience, occasionally the wrong gender may slip through the cracks. Hoover’s Hatchery provides a very good 90% accuracy on all its sexed chicks.

After a few months, the roosters will start to develop beautiful, long shiny feathers on their backs, called saddle feathers. Some hens can have these, although not to same extent.

If all else fails, and you still aren’t sure whether you have a rooster or hen, you’ll know when it crows!

Being able to tell a young cockerel from a pullet takes years of practice and lots of luck!