We enjoy keeping turkeys on our homestead. While this is the first year that we have raised turkeys from poults, we have had a tom turkey named Tarzan for several years.
Tarzan came to us after his original owner was busted by his city for having backyard birds in an area where they are not allowed. He needed to re-home his birds and brought them all to us. Originally, he thought he would pick the turkey up around Thanksgiving and eat him, but that did not come to pass.

Instead, this turkey started roosting in the trees, my kids named him Tarzan, and he became a permanent fixture. We only had the one turkey and he hung out with our chickens until the next year when a similar situation happened with a peacock.
After James the Peacock came to live with us, he and Tarzan became good friends. Tarzan started following James all over the place and it seemed to us like they played games with each other. I have videos of them playing ring-around-a rosy (actually a tree) and tag, and the two of them follow each other everywhere. We really enjoy watching the two birds interact and they have become somewhat famous on Instagram.
This spring, we added a few turkey poults to our homestead as well and Tarzan’s behavior changed instantly. He became very interested in the new little turkeys and started strutting almost non-stop. Poor James has to work really hard now to get him to follow him, but we still see Tarzan and James wandering the property together.
We have found the turkeys to be very curious and funny. While Tarzan follows James all over, the little turkeys follow me. They always want to know what I’m up to and they talk a lot by making cute little clicks and pops. They are very interested in shiny objects and are quick to peck at things, including my legs or shoes from time to time which I actively discourage.
My dad and father-in-law have not so fond memories of turkeys on their farms when they were growing up, but we really enjoy them. They gobble, strut, and act almost dog-like. We really enjoy watching their fun personalities and when they strut around the homestead, it’s really a sight to behold! 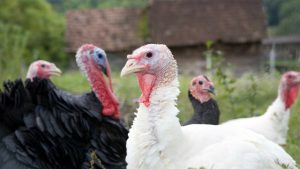