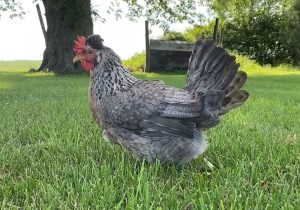 Legbars are a light weight British breed created in the 1930s by mating blue egg-laying birds from South America (similar to the Araucana) with Golden Penciled Hamburgs, and Buff, Brown, and White Leghorns. The goal of the geneticists was to develop a blue egg laying chicken that was auto-sexing. Auto-sexing means that generation after generation the chicks can be sexed at one day of age by the color of their down. After about 15 years of work, the Legbar finally came into existence and was first exhibited at the London Dairy Show in 1947. The plumage is a mix of cream shades overlaid with faint black barring and feature a small crest on the top of the head.