Swedish Ducks came to the United States in the late 1800s. The egg color of the Blue Swedish duck is white, green, or blue-tinted. They are slow to mature and do not do well in confinement, make a good meat duck, and are a moderate egg layer. Sometimes they are quite noisy. The ducks have a loud yelling type quack.

Blue Swedish duck plumage is a uniform bluish slate, with some feathers laced in a darker shade. They carry some white on their wings and breast; drakes are slightly darker than ducks. Adult Swedish ducks weigh between 5 to 8 pounds fully grown, and females lay between 130-180 large white to green-tinted eggs a year.

Ducklings have black, blue, or splash down feathers and their beaks, legs, and feet are black, grey, or orange.

Blue, Black, and Silver Swedish ducks are very hardy, foragers, and do well free-ranging. They were first imported to the U.S. in the late 1800s. They are slow to mature but make a good meat duck, and a moderate egg layer, and do not do well in confinement. Sometimes they are quite noisy with their loud yelling type quack. 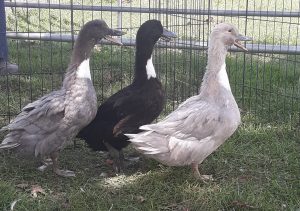