The Buff or Buff Orpington duck was developed in the early 1900s by the William Cook family, who lived in the Orpington area of Kent, England. The Buff is a fantastic multi-purpose bird as it a good egg layer, and it has a reasonable size. Females lay approximately 130-180 large white eggs a year. Fully grown, they will weigh five to six pounds. Some even claim that the buff-colored feathers are easier to pluck than that of the white Pekin. Buffs are nice calm ducks and make great pets. Like most domestic ducks, the Buff can fly only very short distances, if at all. Interestingly, they are the only poultry breed admitted in the American Standard of Perfection with their name as a color only. They remain a very popular breed. The drakes and ducks are both buff in color with orange-yellow shanks and feet. However, the drake’s bill is yellow while the duck’s bill is brownish orange. 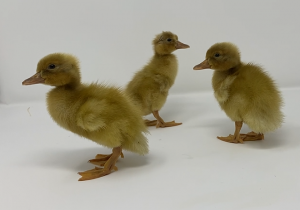