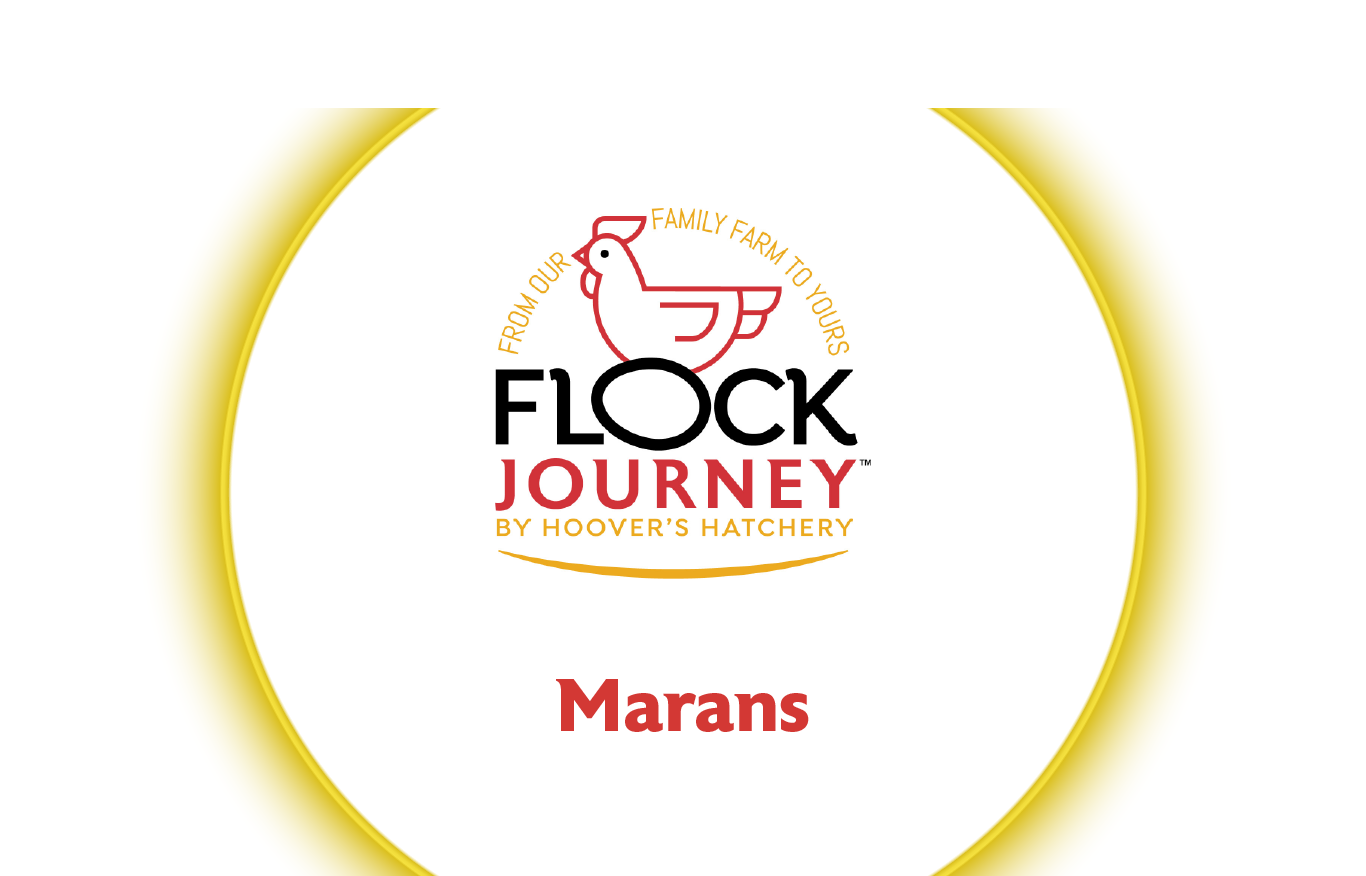 The Marans breed originated near Marans, in the south of France. It is a very winter hardy chicken, which makes them good in colder climates. They tend to be more athletic than most breeds, taking to foraging and free-ranging easily. They are docile, easy to handle, and quiet. Marans will be a good bird if you are new to raising chickens or for children. Marans lay beautiful dark brown and dark speckled eggs. These hardy but sweet birds would make a great addition to any backyard flock.

Cuckoo Marans look very similar to our Plymouth Barred Rocks. Some differences are that Cuckoo Marans have pink feet, while Barred Rocks have yellow feet. Cuckoo Marans are also not barred, and their white markings are not in perfect lines the way that Barred Rocks are. Hens lay approximately 200 medium brown eggs a year, and mature adults weigh between four to six pounds. Chicks have black around their face and backs with yellow feathers on the top of their head, chest, and wings tips.

French Black Copper Marans are beautiful dark brown egg layers. Fully grown adults weigh four to six pounds, and hens lay approximately 175 medium dark brown eggs. They have copper feathers on their necks and iridescent black feathers on the rest of their bodies. Chicks have black feathers, with some copper or yellow tints in their feathers. Their legs and feet are feathered as well.

French Wheaten Marans are variations of wheaten colored with dark tail feathers. They make a fantastic dual-purpose bird weighing between six to seven pounds and lay approximately 225 medium dark brown eggs a year. The males have copper hackles that are darker on the legs and tails. Their legs can, but don’t always, have feathering. They have pinkish-grey legs and beaks. Chicks have very light yellow down feathers and feathers on their legs and feet.

You will genuinely enjoy Midnight Majesty Marans™  in your backyard flock and its dark eggs in your egg carton. These hybrids perform well in many different climates. The Midnight Majesty Marans™  have black plumage that shines iridescent in the sun. Deep browns show up through their down feathering underneath, making them a mix of beautiful dark brown and black plumage. The males are barred. This breed lays approximately 250 large dark brown eggs a year and weighs between six and seven-pounds as adults. Midnight Majesty Marans™  chicks are black with yellow at the top of their head, necks, and wings tips. Most chicks hatch with feathered feet, but some do not.